My January book pile.
This year I have set myself a routine. Instead of meandering about picking books willy-nilly, based on system-less and entirely arbitrary decisions, books shall be chosen this way:

As it happens ‘Persuasion‘ ticks a box on two of the challenges, so hopefully that will ease me in, and probab-, possibl-, hopefully help me stop buying books I know I’m not going to read just yet, but which I’m worried I’ll forget about if I go away and leave them on the shelf.
Now if I can just get the sound of their papery little sobs out of my head, as I walk away and abandon them…
As well as reading, this year I’ve decided to give my brain a workout and included a puzzle book. Though I’m not going to worry about trying to get through one a month.

I’ve been eyeballing these in Waterstones for about three years now, and over the Xmas break finally took the plunge with Sinclair McKay’s Scotland Yard Puzzle Book. I had assumed that they would be far too complex for me, but I was pleasantly surprised to find that they also cater to those of us with an IQ level that more often resembles the lower end wattage of old-school filament light bulbs.They do get progressively more difficult, though, so there is a challenge there for everyone. Having mostly completed McKay’s puzzles in about a fortnight, I picked up the OS Puzzle Tour of Britain. There’s a secret cartographer hiding in a small ,quiet corner of my soul so this was an obvious choice, and it was half-price to boot. So far, so good, I’m three puzzles in and the lightbulb hasn’t blown a fuse. Yet.

This is a surprisingly ‘historical’ collection for me. I usually veer more towards crime and sci-fi. ‘Styles’* is an easy one, then, but I’m Christie-lover anyway, and anything by her can be classed amongst my comfort-reads. My copy is one of the facsimile editions released a few years ago. There is something particularly special for me about reading a book in the form the author understood it would be published in. I have also found, having now read a few, that this small hardback format, is actually very pleasant to read. They are not particularly heavy, but they have that feel of solidity, and substance that paperbacks lack, but without the bulk and stiffness of modern hardcovers.
The Austen is a different proposition. I’ve never been a fan of this genre (in my head its classed as ’19th Century middle-class soap opera’) But I’ve enjoyed, if not loved, the odd BBC production, and they are classics, so maybe it’s time to get my head down and give it a shot. Especially as this one book fulfils both Penguin’s monthly challenge, and one of MMD’s slots.

West Winging It, by Pat Cunnane has been on my shelf for a while. I’ve been mildly obsessed with the goings-on of the White House since the turn of the century, and (yeah, you got it) The West Wing TV series. (Thanks, for that Mr Sorkin). I’m not high brow enough to read the really in depth political books though, so I settle for the stuff that’ll fill the void left by the end of the show. The gossipy light-weight fluff that throws out an occasional detail of process whilst spilling hundreds of secrets about the people, their cock-up’s, and scandals and (hopefully) eschewing any kind of regard for the Official Secrets Act, or whatever they have over there. I’m hoping Cunnane is going to live up to all my lowest expectations.

The last book on the pile is ‘Gentleman Jack’. This is our January book over at The Old Baggage’s Book Club.
Chosen by one of our members, I’m having a little wobble about this, too. I love non-fiction, but the flat-out truth is I’m a junk reader, and whilst non-fiction subjects fascinate me…it takes me a lot longer to read them. They have complicated stuff like, y’know…𝑓𝑎𝑐𝑡𝑠, in them. It takes more time to absorb the information they contain. Not to mention my compulsive Googling of every tiny detail that I suddenly need to know more about. So whilst I’m thrilled at the idea of learning more about Annie, I’m vaguely worried I might have to exert some effort.
So, with slightly mixed feelings about how this month is going to go (how am I going to survive with no sci-fi, no urban fantasy, no….Bryant & May?!)  it’s time to see if I can make it through the first month of my new reading routine. Or if I end up back in Waterstone’s gathering up my weeping new children from the shelves, and carrying them home to a life of comfort, genre-sectioning, and very little prospect of ever being read.

*If your first thought upon reading this was “Harry?”, then you should definitely be reading a different blog… 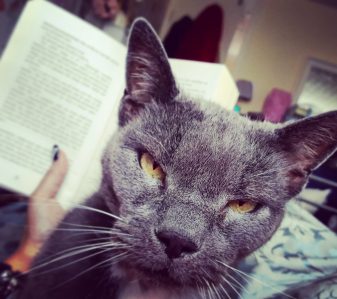 Tales From a Life As-Yet Unlived

Author of The Breach and Zero Bomb

Exploring best practice and research in sexual violence. A loud voice in the fight against victim blaming. Written and Managed by Psychologist and Best Selling Author Dr Jessica Taylor

Exploring What Captivates, Inspires, and Intrigues Us.

It's all in a Nutshell Crochet

from sand to stars

Movement for the Abolition of Prostitution

Tales of humour, whimsy and courgettes